Children complained about parents who were robbed of their personalities and turned into zombies. Residents remembered slurring their words and being unable to think or stay awake. Former administrators admitted doling out drugs without having appropriate diagnoses, securing informed consent or divulging risks.

These are just some of the findings outlined in a new Human Rights Watch report, "'They want docile:' How Nursing Homes in the United States Overmedicate People with Dementia."

The 157-page report, released Monday, estimates that each week more than 179,000 people living in US nursing facilities are given antipsychotic medications, even though they don't have the approved psychiatric diagnoses - like schizophrenia - to warrant use of the drugs. Most of these residents are older and have dementia, and researchers say the antipsychotic medications are administered as a cost-effective "chemical restraint" to suppress behaviors and ease the load on overwhelmed staff. 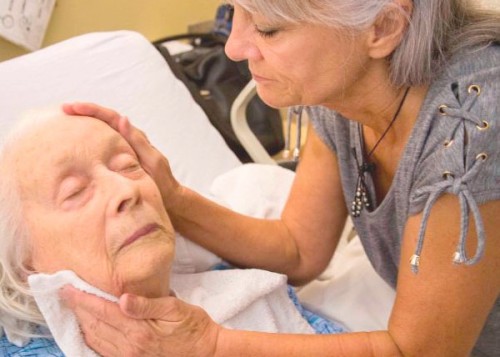 What's revealed in this report echoes the findings of a CNN investigation published in October. The CNN story described how one little red pill, Nuedexta, was being misused and overprescribed in nursing homes. What's more, CNN learned that this overuse benefited the drugmaker to a tune of hundreds of millions of dollars, largely at the expense of the US government. The CNN report prompted an investigation into a California-based pharmaceutical company.

The Human Rights Watch report shows that concerns about overmedicating nursing home residents with inappropriate drugs extends beyond this one pill.

What they found wasn't just disturbing, it was dangerous.

Some family members in dark over dangers

The Food and Drug Administration has not deemed antipsychotic drugs an effective or safe way to treat symptoms associated with dementia -- including dementia-related psychosis, for which there is no approved drug. In fact, the FDA cautions that these drugs pose dangers for elderly patients with dementia, even doubling the risk of death, the report shows. Other possible side effects outlined in the report include an onset of nervous system problems that may cause "severe muscular rigidity" or "jerking movements," as well as low blood pressure, high blood sugar, blood clots and other problems.

Researchers heard from family members who hadn't been informed of the dangers. Others felt they had no choice but to agree to the administration of drugs for fear that their loved ones would be otherwise evicted from their facilities.

When residents were taken off antipsychotic drugs, they and their family members often saw improvement. One daughter, who'd assumed her 90-year-old mother's decline was irreversible, said she saw her mom come back to life after the two years of being on antipsychotic drugs stopped.

"Lo and behold, she can talk again. She can read again ... It's not just that she can walk now ... it's her personality," the report quotes the daughter saying. "She had been sleeping all the time. She was totally incoherent. She had no memory at all. She recognized no one. On the meds, she couldn't remember if you were there while you were there."

Laurel Cline visits her mother, Lenora, in a Los Angeles nursing home. She said she had to persuade staff to stop giving her mother antipsychotic drugs.

There are plenty of ways to deal with dementia-related symptoms or behaviors that don't involve pharmaceuticals, the report lays out. Improvements can be achieved through providing activities, reducing loneliness, creating routines, encouraging relationships with familiar staff members, offering exercise and promoting programs like music therapy and pet therapy.

The industry that cares for the country's aging population, whether that be nursing homes, assisted living centers or other long-term care options, is largely funded by Medicare and Medicaid -- which raises the question: Who is responsible?

Human Rights Watch points a finger at the government, which is required under the Nursing Home Reform Act of 1987 to protect the rights of residents. And what's raised in this report is not new. The government has long-recognized the problem of overusing antipsychotic medications and is required to monitor the use of such drugs, the report shows. In fact, in 2012, the Centers for Medicare & Medicaid Services established the National Partnership to Improve Dementia Care in Nursing Homes in acknowledgement of this issue.

That move made a difference, reducing the use of antipsychotic drugs by 35%, according to a statement emailed to CNN.

Human Rights Watch, too, acknowledged that there have been improvements in recent years, with some facilities slashing use of the drugs after studying the needs of residents. A director of one of these nursing homes in Kansas acknowledged to researchers that the facility "used to be like a death prison" in which "half our residents were on antipsychotics."

While some places like this one in Kansas are taking heed, the human rights group contends that the problem is persistent. Between 2014 and mid-2017, inspectors issued more than 7,000 citations to facilities for violations tied to the use of antipsychotic medications, the report shows. But without meaningful penalties, researchers say, little has changed.

The Centers for Medicare & Medicaid Services agree that more can be done -- and insist it will be.

"CMS appreciates the work done by the Human Rights Watch on this vital issue and is working towards a goal that ensures America's nursing home residents receive safe, high-quality care that is clinically appropriate," the division said in its statement.

The previous administration under President Barack Obama planned to beef up regulations, but the human rights group points out that the Centers for Medicare & Medicaid Services placed a moratorium on strengthened regulations in November 2017.

"The US government pays nursing homes tens of billions of dollars per year to provide safe and appropriate care for residents," said Hannah Flamm, a New York University Law fellow at Human Rights Watch. "Officials have a duty to ensure that these often vulnerable people are protected rather than abused."

The government can do its part in a number of ways, the report suggests. It can end the inappropriate administration of antipsychotic medications by enforcing regulations and penalties, improving inspections, requiring informed consent, and ensuring adequate staffing and training in care facilities.

The Centers for Medicare & Medicaid Services said it's already hard at work to make further improvements, having instituted new goals as of the end of 2017. Among the goals is an expectation that nursing facilities which still overuse antipsychotic medications will decrease their use by 15% by the end of 2019.