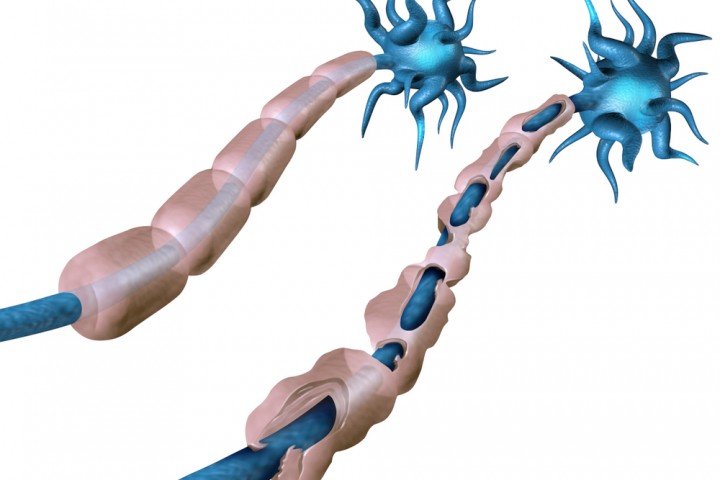 The destruction of myelin sheaths is one of the causes of multiple sclerosis symptoms.

Scientists have revealed some important information that might suggest myelin repair in people with MS might be something possible to do, as long as there are surviving cells to work with.

These cells, also known as oligodendrocytes start producing at birth and form the myelin sheaths that cover the nerves being destroyed by multiple sclerosis.

When the myelin sheaths are destroyed, symptoms associated with multiple sclerosis start appearing. According to these scientists, repairing the myelin sheaths might be the only way to reverse the damage from the progression of the disease.

Dr. Jonas Frisén, the lead author of the study, and a professor of stem cell research at Karolinska Institute in Sweden said that “people with multiple sclerosis do not generate cells needed for re-myelination. Instead, their bodies depend upon cells given at birth.” “We need to save these cells,” he added.

When they were gathering their data, they were looking at nuclear bomb tests that were being conducted in the United States, the Soviet Union, and some other countries during the 50s and the 60s.

These nuclear bomb tests left a radioactive carbon in the atmosphere, and it has since spread all over the globe. The effect of this can be seen in human cells, where it left a lasting mark. Postmortem, this marker was used to find out the age of the cells.

“The results were a big surprise,” Frisén said. “This is technically difficult to approach in humans. There is no other source of a marker in the environment that is integrated into DNA and can be used for the analysis of cell generation. This is the first human study,” he added.

The results of the study have surprised the researchers, as they showed something that contradicted their expectations.

When it comes to mice, the myelin is being repaired by the new oligodendrocytes, while at humans, it’s the old cells that do the repair process.

“These results strengthen the support to treat multiple sclerosis aggressively and early in the disease to prevent loss of oligodendrocytes, which are not replaced efficiently. We need to save the ones we have,” said Frisén. “This was a robust study containing about 40 MS tissues and about the same healthy tissues,” he added.

The postmortem cells that were used came from tissue banks originating in the United Kingdom, the United States, and some other countries.

This study has shown how important it is for scientists to think outside of the box when it comes to new treatment strategies.

“It means that prompting new oligodendrocytes is not a viable strategy,” said Frisén. “Instead, we need to keep them alive and functioning and trigger them to repair.”

Claude Schofield, PhD, and a director of discovery research at the National Multiple Sclerosis Society said that “this is a very provocative paper. If it turns out to be true, it’s a pretty important finding.”

“This will have a massive impact on how we view our approach to treating MS. More research is needed. But measuring the age of cells is not available. If we could develop chemical markers (other than nuclear isotopes) that could date cells, it is possible to recreate and do the research needed,” said Schofield.

“This study was done postmortem with donated tissue. If we could develop markers to use with imaging techniques, we could better understand the pathology of individual MS and lead to better treatments,” he added.

However, not all oligodendrocyte cells are the same, as some cells are able to create longer myelin sheaths, as well as have different unique characteristics.

These new types of cells were found in another paper that was published in the journal Nature. The contents of the paper will be crucial for understanding the progression of the disease, as well as coming up with new therapies to fight it.

“This is huge for MS,” said Schofield when commenting on the second study. “It will revolutionize the way we look at MS.

Schofield also explained that before this study was made public, it was only possible to identify a cell by its shape and some other characteristics. However, with the help of the new methodology, it will be possible to find a fingerprint of the cell and extrapolate everything from it. He compared it to the difference between old rotary phones and new smartphones.

“Now we can find differences that we would never detect before,” said Schofield. “In terms of understanding disease, this is the future, the most important thing going on in biology right now.”