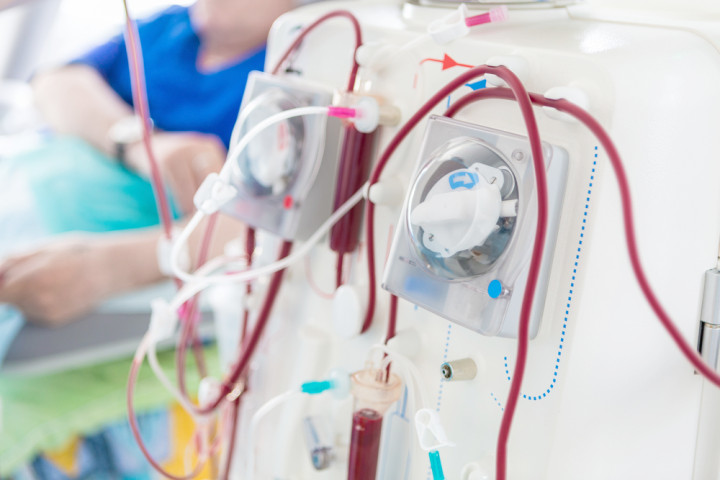 Home / News / For many seniors, dialysis is a way of life, but maybe it shouldn't be

People diagnosed with kidney disease can choose conservative management to ease the symptoms instead of dialysis, however, not many people are aware of this option.

John Everdell had to deal with kidney disease for the better part of his life. When he was younger and waiting in line for a transplant, there was a brief period when he had to undergo dialysis. That’s when he decided that, if his kidney should fail again during his 60s, he would not go for this treatment again.

“He was a very independent man, with an idea of how he was going to live his life,” said Trix Oakley, who has been with him for 22 years.

“He didn’t want to be tied down to the routine, having to report to the dialysis clinic every other day. He didn’t like the ups and downs — feeling good but washed-out, then feeling crummy. He didn’t like being attached to the machine,” she added.

When he was diagnosed with kidney disease for the first time, Mr. Everdell was in his 30s and working as a woodworker and furniture maker. By the time he turned 60, he had already received two kidney transplants from his siblings.

However, not too long ago, he and his partner realized that his second transplant was starting to fail, as the monthly blood test readings started to look worrisome. He always felt cold and tired, and he could notice some swelling in his hands and feet. At that point, his doctors recommended dialysis.

Ms. Oakley – his partner, helped him make use of the so-called “conservative management,” a type of treatment that helps slow down the disease’s progression, in addition to treating the symptoms and complications associated with it. He was under a strict diet, controlled his blood pressure, paid more attention to his weight, and used hormone injections to combat anemia. When needed, his sister will provide him with the third kidney transplant.

While all of this was happening, he and Ms. Oakley were on road trips, and took the ferry from Canada to Florida. Once upon a time, Mr. Everdell used to sail across the Atlantic, but as he wasn’t able to do it anymore, Ms. Oakley said that they “took as many ferries as we could, because he loved being on the water.”

What is Conservative management

Dialysis was developed in order to temporarily keep patients awaiting kidney transplants alive until the surgery, but it becomes a way of life for some. Over 104,000 people aged 75 and above received dialysis in 2016, according to a report by the United States Renal Data System, and over 130,000 patients aged 65 to 74.

It’s safe to assume that most of these patients haven’t heard of the alternative to dialysis by way of managing their disease and symptoms through regular physician monitoring and consultation – not only by dialysis.

While dialysis extends survival, it also makes life harder for patients because they have to travel to the clinic at least three times per week where they undergo hemodialysis sessions that last four hours, or daily multiple flued exchanges for their peritoneal dialysis, something that can be done at their home. These patients can definitely benefit from conservative management.

Survival is only one of the benefits that conservative management brings, as patients will have much more freedom of movement and do the things they like, even if that means it will decrease their life expectancy by a few weeks or months.

“Dialysis is a life-changing event,” Dr. Susan Wong, a nephrologist at the Veterans Affairs Health Services Research and Development Center in Seattle, and lead author of a new study in JAMA Internal Medicine. “It’s a very demanding form of treatment. It involves medical issues, spiritual issues, quality of life. It’s a big decision,” she adds.

However, patients reported that can’t remember making such decisions, let alone talk about it. Most health physicians often tell their patients that dialysis is the only option, while only a third of them informed their patients of other options, such as conservative management.

Why do people choose dialysis?

Keren Ladin, director of an aging and ethics program at Tufts University talked to both patients and nephrologists and said that “patients didn’t recognize it as a choice — ‘My doctor told me I’d die if I didn’t do dialysis.’”

“Or they’d say that it wasn’t their choice, that their doctor made the choice,” she added.

The patients that fall into the first category would probably be happy to know that people that use conservative management had lower chances to get hospitalized at the end of life, lower odds of having to undergo aggressive procedures or die in a hospital.

Despite this, doctors sometimes even try to persuade patients against this decision, according to Dr. Wong’s new study of 851 Veterans Affairs patients that declined dialysis. Some of the medical records say that doctors brought their patients’ competence of making choices in question, and tried to make them change their decision.

“Most were skeptical,” Dr. Wong said of the doctors’ response. “It’s a relatively unusual decision, and providers find it suspects.”

Some other countries have made different solutions for people in their later years. For patients with failing kidneys that are over 85 years of age, less than 7% of them underwent dialysis in Canada, according to a large retrospective study, and that percentage was smaller – less than 5% in Australia and New Zealand.

For comparison, in the U.S., a 2016 study of Veterans Affairs patients showed that over 40% of people with failing kidneys aged 85 and older have started doing dialysis.

When Lyman Dally was 92 years of age, he fell in his home in South Orange, N.J., which led to kidney failure. While at the emergency room, the doctors started dialysis.

His son, also called Lyman Dally said that “after a week or two, he decided, ‘This is not the way I want to live. It’s painful and it’s tiring.’”

His father stopped his dialysis while telling his son that he had a great life, and died two weeks later.

Medicare and other insurance options try to promote this kind of treatment. Dr. Alvin Moss, a nephrologist and palliative care specialist at West Virginia University School of Medicine said that their “financial incentives are all about putting people on dialysis.”

Another fact Medicare and other insurers have going for them is that low reimbursement rates for the monthly office visits that are designed to supervise the conservative management might lead to shutting down a practice due to financial reasons. Additionally, in Dr. Moss and some other researchers’ minds, conservative management also implies lower or any care at all.

Their suggestion is to rename conservative management as “active medical management” or “comprehensive supportive care.”

For the time being, patients that are interested in conservative management will have a difficult time finding a doctor that will support this form of “care.” Only a small number of nephrologists have started such programs at New York University, the University of Washington, the University of Rochester and U.P.M.C. in Pittsburgh, among other medical centers.

In other places, Dr. Moss advises to find palliative care specialists. In addition, patients should record their preference for conservative management in their advance directives, including their state P.O.L.S.T. (Physician Orders for Life Sustaining Treatment) forms.

When it comes to information regarding conservative management, there are organizations like the  Coalition for Supportive Care of Kidney Patients and the American Association of Kidney Patients that have set up some useful websites. Dr. Moss also points to a Canadian website, Conservative Kidney Management.

For John Everdell, conservative management allowed him to take many ferry rides. Unfortunately, Mr. Everdell was hospitalized last spring with heart failure at the age of 69. This is a common illness among kidney patients and it made a third transplant impossible because his donated kidney failed.

After that, he agreed to try his chances with peritoneal dialysis, and Ms. Oakley told him “If you hate it, you can stop.”

However, Mr. Everdell caught a serious infection and when his doctors suggested him to switch to daily hemodialysis, “He said no, he didn’t want to live that way,” Ms. Oakley said. He explained why he chose to do so to his doctors, his sisters and his best friend.

Two months after getting hospitalized and two days after he refused dialysis, he died at the Tufts Medical Center in May. According to his partner, he “Had no regrets.”