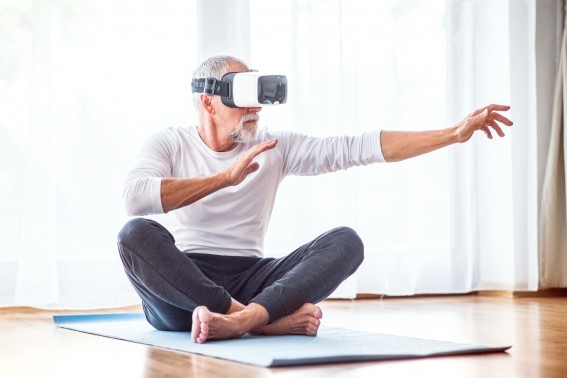 Home / News / VR for The Elderly: How The Technology Improves Seniors’ Lives in Nursing Homes

Virtual reality is, among the many technological wonders on the market, one of the more interesting promises for the future of senior care.

This is especially true because of its timing since the technology has arrived when mobile devices are already widely used by the elderly - and often greatly appreciated as a way to keep in contact with family and the world. According to a past survey conducted by Pew Research Center, a vast majority of seniors have described their experience with smartphones as “liberating.”

Having that in mind, across the United States, several skilled nursing facilities have been using VR (virtual reality) as extra help in the rehabilitation of patients according to a recent McKnight’s article. The use of this technology plays an important role in improving the lives of older adults in many ways. Not only can it be used to provide entertainment and exercise to those who cannot leave the facility as frequently as they would like to, but it can also help those who have mobility issues and require physical rehabilitation.

Research from Aalborg University in Denmark showed that virtual reality can do more than just offer exercise for the brain. It can also motivate seniors in nursing homes to exercise. The study was based on placing large television screens in front of exercise bikes and showing the users various virtual landscapes as they pedaled, with their speed being determined by the output on the bikes linked to the screen. At the end of the research, the participants had significantly increased their fitness level. Many of the residents asked for the technology to become permanent there.

This prospect of inspiring the elderly in nursing homes to exercise is very positive, particularly because many do not get a healthy amount of physical activity, despite many care homes already including access to physical therapists and fitness facilities.

The possibilities offered by VR do not stop there. In Orlando, for instance, virtual reality is being used to assist people with dementia. There, the patients spend half an hour at a time looking at short scenes that evoke nostalgia and memories. Among the choices of scenes to watch, there is a 1950s jazz club with a live singer and patrons having martinis, and a painter creating artworks with floral themes. These scenes are expected to offer a sense of tranquility to patients with dementia, and it has the benefit of reducing agitation and depression.