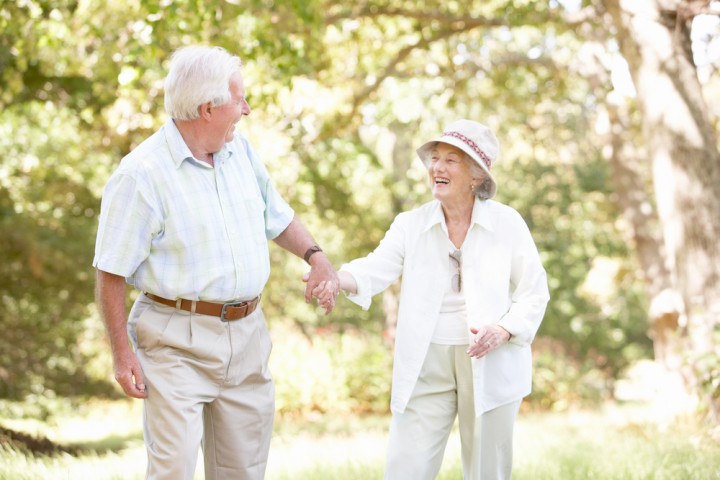 A new clinical trial concludes that walking and some other forms of average-intensity exercise might help fight back at the consequences of an aging brain in seniors that are seeing a decline of mental activity.

The study was aimed at seniors that struggle with some lighter issues with memory and other mental skills. The results these researchers uncovered was that only six months of average-intensity exercises such as walking or cycling on a stationary bike had some beneficial effects on seniors’ brains.

More accurately, those that did these forms of exercises noticed an improvement in their mental functions such as being more attentive, increased behavior regulation, as well as organizational skills and increased goal achievements. Additionally, people that made some healthier adjustments to their diet such as an increased intake of fruits and vegetables noticed increased gains.

The effect these changes made to seniors’ brains was amounted to at least nine years of brain function “age reversal,” according to lead researcher James Blumenthal, a professor at Duke University School of medicine, Durham, N.C.

Just for reference, said mental abilities saw a continuing decline in the study participants that were only given some health education.

According to experts, these results seem to support the idea that leading a healthy lifestyle can aid in protecting seniors’ brains with age.

Keith Fargo, director of scientific programs and outreach for the Alzheimer’s Association said that “it's never too late to start." "The people in this study were older, already had cognitive [mental] impairments and cardiovascular risk factors, and they were sedentary," he added.

These results were reported to be “great news,” according to Fargo, who was uninvolved in the research.

He stated that it’s due to this being a clinical study that went to great lengths to put exercise to the test. A lot of previous studies have shown that people that exercise are usually in a better mental state as they get older. However, those studies weren’t able to prove the connection, according to Fargo. Clinical studies, on the other hand, do.

"They weren't training for a marathon," he noted.

Blumenthal stated the same for the diet changes that some participants made in their lives. The participants were on the so-called DASH diet, one that is usually recommended to people that have high blood pressure and is rich in fruits, veggies, whole grains and healthy unsaturated fats. The study is also low in sodium, sugar, as well as meat and dairy that is high in saturated fats.

Fargo concurred that the changes were easily achievable by most seniors since “almost everyone can get up and sweat a few times a week."  "Almost everyone can eat more fruits and vegetables than they already do,"  he added.

For the purpose of the study, Blumenthal’s team reached out to 160 adults that were 55+ years old, and were complaining about a decrease in their memory and mental abilities. The tests that were performed confirmed their suspicion that they had some form of mental impairment.

None of them were in a late stage of dementia, like Alzheimer’s disease. However, in the beginning, the performance of the group during tests on executive function was the same as people in their early 90s, regardless of their actual age of about 65.

Once six months have passed, both of the groups that were exercising noticed an improvement during executive function tests, while the health-education group’s results not only didn’t show any improvement, but showed a decline in their mental capabilities. The group that followed the DASH diet and did some exercise had the best results, while the group that was only following the DASH diet didn’t show any significant health difference.

Blumenthal noted that the study group had a small number of participants, meaning it’s difficult to find out what the effects were for each intervention. This means that larger studies were needed for that.

He also said that the study didn’t prove with 100% certainty that exercise and/or healthy diet can delay or prevent final-stage dementia in some people.

Therefore, do daily exercises and keeping a healthy diet ultimately help with cognitive skills? According to Blumenthal, science is unclear on that issue. However, in this study, a connection was shown between physical improvement and participants’ test performance. In a similar fashion, if their heart disease risk factors were diminished, even a small decrease in blood pressure, their test performance was improved as well.

Fargo said that those results are consistent with the theory that shows a better blood and oxygen flow to the brain can contribute to increased adult mental performance.

He also pointed out that the Alzheimer’s Association will begin a new study that will focus on a combination of changes to people’s lifestyles such as exercise and diet, as well as social communication and activities that stimulate the brain like puzzles and crosswords.

It will also test if those changes can protect or improve mental functions with seniors that have a higher risk of mental decline.

This study was published on December 19th in the journal Neurology.

If you wish to find out more about how to keep your mental health, read the Alzheimer’s Association article on 10 Ways to Love Your Brain.