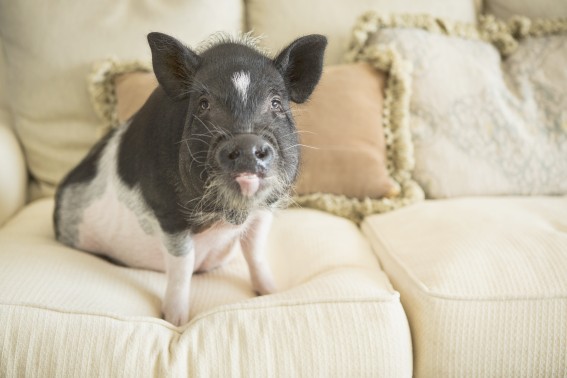 Albert EinSwine is a very popular pig. According to the Altamont Enterprise, he visits 130 nursing homes on a regular basis, and he is always greeted with smiles and people reaching out to get a quick pet in.

Terry Hutchison, Albert’s owner, first thought of the idea of therapy pigs when a friend gave her a pig as a get-well gift during her recovery from a serious medical condition. While she was skeptical at first, the pig quickly became like a member of the family. Terry also noticed that her pet pig, named Bacon Bits, helped to cheer up people who were visiting her. It was then that the idea was born.

Now her idea has become a full-time 8 a.m. to 7 p.m. volunteer schedule that includes visiting nursing homes and other facilities across 20 counties. It is an act of love.

Why is it that we respond so positively to animals?

Animal therapy, or animal-assisted therapy, has become especially popular among nursing homes. Animals can help older people with motivation, communication, and healing through simple interactions. It is an established tool used by therapists to make interactions easier for disabled and elderly patients.

One theory on why it works is that it helps nursing home residents to have a focus outside of themselves. Another theory involves how a calm animal can instill a sense of calmness and safety in us as well, resulting in lower stress levels. The simple and selfless interactions of dogs, cats, and in this case pigs, can help shy or withdrawn individuals to break out of their shells and begin to interact with the world again. No matter what theory you think is best, it is hard to ignore that these therapy animals have helped to brighten the lives of countless nursing home residents over the years. We think Albert the therapy pig is a shining example.