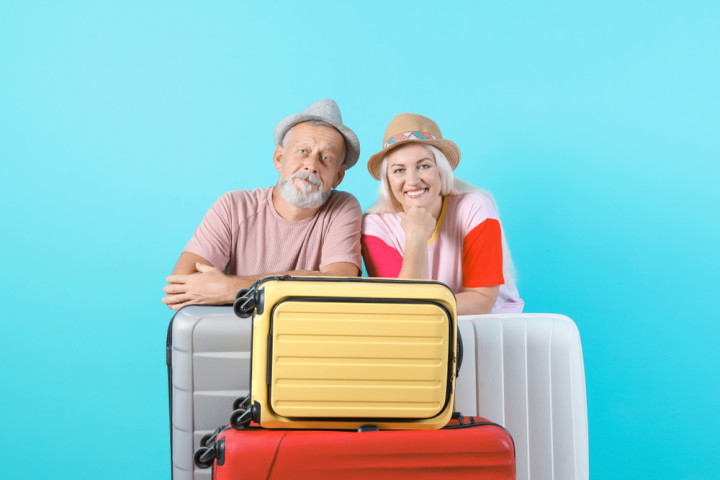 More and more people aged over 60 appearing all over the world and starting to travel so airports have started to take steps to make their commute easier and more convenient.

One of these travelers is Samantha Flores who had some difficulties moving around the airport. The signs around the airport were not easily distinguishable, the announcements were too low to hear, and the movement of people around her made her feel disoriented. After a while, she managed to sit down on one of the benches and have a rest, finally being able to take off her “age simulation suit”.

She is the director for experimental design at the architecture firm Corgan, and the experimental suit that she was wearing was meant to simulate the physical challenges older people have when walking around the world. She was also wearing goggles and headphones which were designed to obstruct her sight and hearing as well. The gloves she was wearing reduced feeling and simulated hand tremors. Additionally, she was wearing shoes, coupled with neck, elbow, and knee movement restrictors, which added some further mobility impairments.

This experimental suit is one of the ways designers working with airports and other travel industry entities try to find out how a certain group of people interact with their surroundings other than simple interviews. And since the number of seniors is currently on the rise, this suit is one of the best ways to do that.

What should be changed?

Some design modifications seem apparent, like benches for regular rest, and others, like directional signs – are not. Stemming from a research done by Corgan, seniors are much more likely to face the ground when walking, meaning they won’t be able to see the directional signs that are placed above them. Therefore, the company made a suggestion to airports that they should place their information signs a bit closer to the ground. Additionally, seniors engaged in air travel quite often rush to the gate in order to make sure not to miss their flight, bypassing the main concession hubs in process. Some other recommendations this company gave were adding a bigger variety of food options near boarding areas and avoiding shiny floors, since they make it appear wet, making people worry about slipping.

The leisure and tourism industries should also try to accommodate some modifications of their own as well, according to Donald P. Hoover, associate director of Fairleigh Dickinson University’s International School of Hospitality and Tourism Management. These industries “must consider the disabilities related to aging and keep them in mind when designing and creating anything associated with the guest experience,” he advised.

According to Professor Hoover, many of the changes proposed to airports could also work for travelers of any age. Hotels or airports, in example, could shorten the time people wait to check in, train their staff to be aware and respond to their guests’ special needs, design more user-friendly websites, as well as adding ergonomic bathrooms. All of these modifications would surely improve everyone’s experience.

Innovations are present on the technical side as well

There are some modifications that can be done on the technical side as well. Some airports have started incorporating specialized systems that are designed to transmit announcements directly to the users’ telecoil receivers located in their hearing device, which helps people with hearing aids to have an easier time understanding gate announcements. Some of the airports that have already incorporated this system are located in Detroit and Rochester.

On the other hand, some other airports like the ones in Los Angeles and Seattle-Tacoma, have started offering Aira – glasses that are specially designed for people with low-vision or blindness. These glasses have a Wi-Fi connection that allows for a trained guide to monitor what the wearers of the glasses are seeing and provide assistance in navigating through the airport, find their luggage, and do other tasks. Kevin Phelan, vice president of sales and marketing for Aira, reported that their biggest requests from seniors that are using their service in hotels and Airbnbs were related to assistance with walk-through in order to help them avoid tripping and adjusting thermostats.

According to some estimates by the Seattle airport, about 35% of all people that came through last year were aged 55 or older. In order to provide a better service for this age group, and others – the airport started offering electric cart service between the light rail station and the terminal, meaning travelers won’t have to walk the last few tenths of a mile. Cruises coming from Alaska provide travelers service that allows them to send their luggage from the ship directly to their departing flight.

Danny Valentine, the spokesman for Tampa International Airport said that this airport’s number of older travelers that are 55 or older is higher than the national levels.

The Tampa airport completed a significant renovation and expansion undertaking last year, and they worked together with HOK – a design firm, and Skanska – a construction company in order to make walking distances as shirt as possible, and to create a layout that would allow passengers to find their way through gates, restrooms, and restaurants with ease. In addition to that, several staff members have been placed all over the terminal.

“For older passengers, it’s important to have that human touch,” said Mr. Valentine.

What other travel branches are doing?

On the other hand, hotels like Marriot International are paying more attention to travel trends that are popular with older guests. The vice president of distinctive select brands at Marriott International, Toni Stoeckl, said that one of the brands – Element Hotels, has started incorporating “Studio Commons” – four rooms units that are placed around a single common area, and they are due at the end of this year. This was created due to the rise of multigenerational family trips. These new types of rooms will allow “baby boomers can have their own private room but still share a common living area with kids or grandkids.”

But not only big hotel chains are focusing on these concepts, as Joanne Cunningham, director of sales and marketing at the Dunes Manor Hotel & Suites in Ocean City, Md., reported that some of the regular guests that are visiting this hotel have been around since the 60s. The hotel management seeks to keep their guests satisfied when they come back to the hotel with their children or grandchildren, and to make that happen, they reconstructed the top three floors to rooms that are more comfortable for older people, equipping them with showers, and adding fixtures and furnishings such as lamps with higher brightness and larger outlets for electronics, as these have been proven to be easier to use by their older guests.

“It’s important that guests who have been part of our ‘family’ for so many years are well taken care of,” Joanne Cunningham said.

Some other properties like this, like the Fantastic Flavours Ice Cream Parlour in Youghal, Ireland are also incorporating some design changes with the goal of becoming elder-friendly. According to the proprietor, Miceal O’Hurley, they estimate that approximately half of their guests are retirees from the U.S. and Europe. One year ago, they worked together with older people and architects in order to review every customer needs, improving their experience by removing tripping hazards and adding better lighting.

Additionally, they installed wider door frames to make sure that people with walkers are able to go through with ease. Sturdier table bases have been added as well, allowing guests to lean on them while standing up. They also removed some furniture to make more free space which will be easier to navigate through. The sound dampeners that were installed help minimize sharp sounds and high frequencies that previously made older guests lower down their hearing aids.

While, according to Mr. O’Hurley, “it was a lot to do,” he also noted that this was necessary, “as the average age of travelers increases.”

The co-founder of the travel expedition company Pelorus, Jimmy Carroll said that he noticed that with the increase of popularity of multigenerational travel, grandparents really  “don’t want to miss out on anything.” His staff members are continuously trying to find new ways for every customer to engage in social activities. An example of this is one of their customers’ family trip to Costa Rica, during which a grandmother went traveling with a submersible operated by a pilot as her grandchildren were snorkeling around the vehicle.

This company focuses on providing experiences for their older customers that will allow them to “do something they thought was no longer possible,” Mr. Carroll noted.

According to Aixa Ritz, who focuses on research into sustainable tourism at Fairleigh Dickinson’s hospitality school, people’s “definition of adventure changes as we get older.” At the moment, she’s 72 years old, and calls herself a “senior boomer.” While she and her friends are having fun seeing new places, they still “want everything taken care of.”