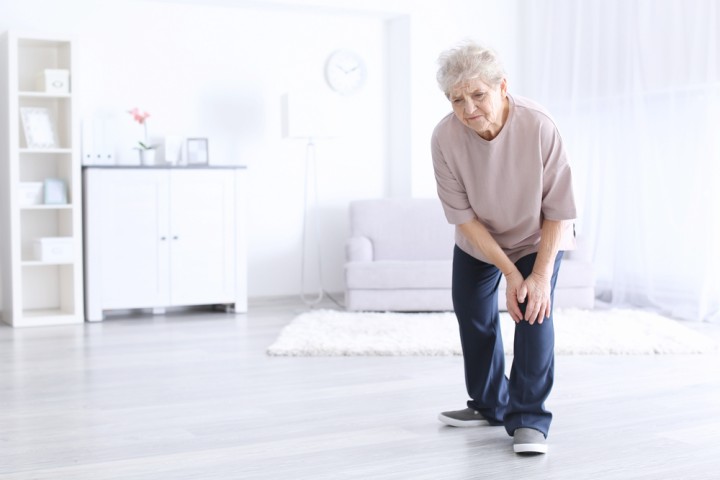 Heberden’s nodes usually show up in finger joints and are associated with osteoarthritis in the knees.
This kind of finger joint swelling is long known to be a potential sign of osteoarthritis, but it might also be a sign of arthritic damage to the knees.

Heberden’s nodes, as they are called – are bony growths that show up in the joints that are closest to the fingertips, and are a part of the look of arthritic hands. They usually form after the cartilage between the finger joints gets worn away because of osteoarthritis.

When the cartilage is gone, the bones rub on each other, which eventually leads to bone loss. During the healing process, our body’s bone replacement process grows bone on the joint, which leads to the formation of small-sized nodes.

Unfortunately or not, knee osteoarthritis doesn’t have these obvious markers. However, according to Dr. Arya Haj-Mirzaian, MPH, joint swelling in the fingers might be an indicator that there is such damage to the knees as well.

Dr. Haj-Mirzaian, a postdoctoral fellow at John Hopkins University School of Medicine in Maryland and lead author of a study linking these two conditions had this to say on the matter: “The presence of (the nodes) in a physical examination is associated with a distinct pattern of worsening of osteoarthritis-related structural damage in the knee joint.”

According to him, the findings presented by the study could aid doctors in better diagnosing the generalized osteoarthritis even if the symptoms are localized to the hands joints, further adding that they could also pave the way to a new subcategory of osteoarthritis that is specific to people that have Heberden’s nodes as a marker for systemic disease.

According to Dr. Haj-Mirzaian, “osteoarthritis isn’t a simple disorder. There are many different causes, including trauma, gout, genetics — they’re all totally different. Our research shows that we need to study arthritis based on (the nodes).” He also pointed out that these nodes might be affecting the hips and other joins, too. Additionally, there is research that dates back to 1989, which implies a connection between Heberden’s nodes and osteoarthritis in the hips.

This study had 395 participants with Heberden’s nodes, as well as 188 without these kinds of joint swellings. According to the researchers, a strong connection was found between Heberden’s nodes and the measurements of knee osteoarthritis.

The newest study included MRI exams of participants, builds upon a study done in 2018 by Dr. Haj-Mirzaian and his colleagues which found similar connections with the help of X-rays and physical knee examination.
To be more precise, the researchers in the study uncovered a more periarticular bone expansion in the knee joints in participants that had Heberden’s nodes, more specifically – in the region of the femoral joint.
On another note, however, the study revealed that the group with Heberden’s nodes seemed to have a lesser development of osteophytes, or more commonly known as bone spurs, in the area of the knees.

Research reactions about osteoarthritis in the knees

Dr. David Clark Hay, a wrist and orthopedic hand surgeon at the Cedars-Sinai Kerlan-Jobe Institute in Las Vegas stated that the connection between arthritis in two different parts of the body seems interesting and supports the need for additional research.

Dr. hay said: The study suggests a connection between [Heberden’s nodes] and periarticular bone expansion, but it is not clear what the clinical consequence would be, particularly when considered in conjunction with their finding of less worsening in osteophyte score. The study suggests a future line of investigation into the underlying mechanism; might the same underlying genetic/biologic process that drives [Heberden’s nodes] formation in the hand be related to the periarticular joint expansion in the knee, but differ from the mechanism driving osteophyte formation?”

Dr. Enrico Villanueva, and osteoarthritis expert and orthopedic surgeon at The Centers for Advanced Orthopedics in Maryland, said that Heberden’s nodes are known to run in families as well: “Some people are predisposed to Bouchard’s nodes (which show up on the middle joint of the fingers) or Heberden’s nodes. There certainly could be a genetic link to these changes.”

He added that it sounds logical that people with Heberden’s nodes could also have arthritis at other parts of the body, and not just their hands. He said that “when an orthopedist detects osteoarthritis, we tend to make a full examination because we don’t want to miss an opportunity to detect something sooner and begin treatment.”

The bone spurs in finger nodes, also known as Heberden’s nodes might be a sign of osteoarthritis in the knees, as well as the hands.
This research might put more focus on a type of arthritis that is more specific to people that have Heberden’s nodes.
The research results might provide help when diagnosing systemic osteoarthritis, including aiding future researchers to design studies that are better at targeting multiple types of population and arthritis.