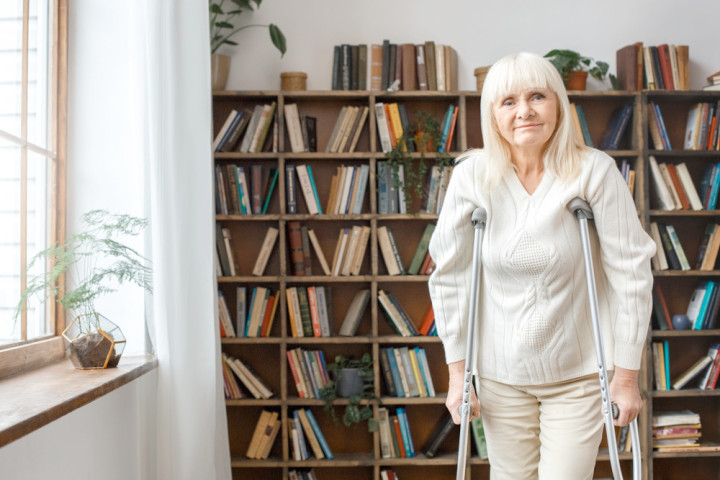 What is the best place for recovery?

When seniors undergo hip or knee replacement surgery, one of the questions that inevitably gets asked is: “What is the best place for recovery?”

The two most common places are at home or in a rehabilitation facility.

Surprisingly, if it’s an elective procedure, the option that people have recently started to choose is at home – where their friends and family would be able to provide help and support unless the person that’s recovering doesn’t have any more serious condition that could cause some complications.

As evidence has shown, home recovery will become even more common, simply because it’s safe and because hospitals have started to change their medical practices accordingly to the ever-changing Medicare policies.

What do studies show?

There is some new data stemming from a study published in March in the JAMA Internal Medicine that involved information or 17 million Medicare hospitalizations of people from 2010 to 2016. All of these patients were seniors that chose home recovery or rehabilitation facility after they underwent a medical procedure or to recuperate from a serious illness. One of the most common reasons for the hospitalizations was knee and hip replacement procedures.

According to the study, patients that were sent home with home health care services showed no difference in improvement when compared to those that were sent to a rehabilitation facility. This assessment was done by assessing their ability to walk, go up and down the stairs, and some other physical activities. Additionally, the risk of death 30 days post-surgery was the same in both groups.  Moreover, the costs for people that were sent home were significantly lower, but hospital readmissions were a bit higher which would signify that while home health care services provide an almost equal level of care and quality with rehabilitation facilities, they still need some work done on family caregivers in the field of education and training.

“What this study tells us is it’s certainly safe to send people home under many circumstances,” said Dr. Vincent Mor, a professor of health services, policy and practice at Brown University’s School of Public Health who also wrote an editorial accompanying the study.

This new report is an extension of some previous research that showed similar results. During 2017, researchers from New York City’s Hospital for Special Surgery published a study of 2,400 patients that did total knee replacement surgery and were sent home or to a rehabilitation facility between May 2007 and February 2011. No differences in complications rates or functional recovery were noticed after six months, nor patient-reported outcomes after two years.

The authors of the study said that, “As a result of these findings, we are encouraging all of our patients to consider home discharge after TKA [total knee replacement].”

Similar results from past studies

One year before that, researchers at New York University published a report in JAMA Internal Medicine that showed that between 2009 and 2012 and 2013 and 2014, rehabilitation facilities discharges went down from 68% to 34% for patients that underwent hip and knee replacements, 71% to 22% for patients that underwent cardiac valve replacement, and 40% to 30% reduction for patients that had spinal fusion surgery performed. This was due to the fact that these people were discharged to home recovery. For the duration of that period, New York University Langone Medical Center paid for “episodes of care” for joint replacements that had a post-hospital recovery period, which is a policy that is currently promoted by Medicare.

Diane Rubin, aged 67, who is currently residing in Long Island underwent a hip replacement surgery at the NYU Medical Center back in January. Before she did the surgery, she was presented with a list of things she’d need to have ready for her recovery. After that, a nurse along with a physical therapist made a visit to her home on a regular basis for the duration of three weeks.

“I was more comfortable recuperating at home and I’ve had absolutely no complications,” she said.

Who gets to go where?

So, how do physicians know where should patients go? “In general, we tend to send patients to skilled nursing facilities who are older, sicker, more deconditioned after surgery, and who have no spouse or caregiver, fewer resources and little social support,” said Dr. Leora Horwitz, a co-author of that study and associate professor of population health and medicine at New York University School of Medicine.

Even though it’s widespread knowledge that people the live along ought to consider rehabilitation facilities, researchers at The Rothman Orthopaedic Institute at Thomas Jefferson University in Philadelphia last year published their research paper  that showed this might not be true. At this institution, nurse navigators are assigned to patients, and they provide assistance before and after patients undergo hip or knee replacement surgery. It was also shown that patients living alone remained at the hospital for a longer time, and used home health care services for a longer duration that people that lived with someone else.

When they were sent to rehabilitate at their homes, patients from Rothman Ortopaedics didn’t report higher rates of medical complications, nor higher hospital emergency room visits when compared to patients that were sent to rehabilitation facilities. Almost every patient that was living alone at home said that they would choose a home discharge again, if needed.

Dr. William Hozack, a co-author of the study and professor of orthopedic surgery at Thomas Jefferson University Medical School, noted that patients that were being sent to rehabilitation facilities were also most likely sicker and needed a higher degree of care than those that were home discharged, something that could potentially add some bias to the research results. Regardless, practices have started to see some considerable changes, and Dr. Hozack and his colleagues report sending 95% of their patients that underwent hip and/or knee replacement surgery to their homes, as opposed to sending them to rehabilitation facilities.

Still, according to Carol Levine, director of the United Hospital Fund’s families and health care project, who has had two hip replacements noted that even though these patients might receive a home discharge, people should be aware that they might need some greater degree of help at their homes, and especially so during the first few weeks after their surgery. The downsides to home discharges are that this puts a great burden in caregivers and the possibility of a complication not being recognized in a timely manner. Additionally, unless friends and family can’t help, many needs will be unmet, which would lead to an unsatisfactory level of following of recommended rehabilitation regimens. Moreover, the end results might not be as good if there are no readily available services for people at their homes.

The Utah’s Intermountain Healthcare health system operates in 23 hospitals and almost 170 medical clinics contains a wide array of health services that range from palliative care and primary care to and hospital care and dialysis – all to patients’ homes with thanks to the new Intermountain at Home program. Another focus of this program is its focus on home recovery, and in order to facilitate this, over the past years, Intermountain devised some standardized procedure for hip and knee replacement surgeries, said Rajesh Shrestha, the health system’s chief operating officer of community-based care.

This is made easier by an assessment that every joint-replacement patient is subjected to, which helps determine the resources that will be needed at their homes. After that, a health care plan gets made, and a case manager – which is usually a registered nurse is assigned whose job is to ensure that the physical therapy, medical equipment, and home health care are being supplied in a timely and high-quality manner. This case manager is also responsible for postoperative care coordination with orthopedic surgeons and post-surgery reconnection with their primary care physician. Additionally, there is also a team of providers that is available 24/7.

Over the past years, the number of patients being discharged to rehabilitation facilities has been reduced by 50% at most Intermountain Utah facilities, and no increase of complications or hospital readmissions worthy of note have been recorded, according to Shrestha. For example, in 2018, 85% of patients that underwent knee replacement and 88% of hip replacement patients have received home discharge.

Another health plan at Kaiser Permanente has over 12 million members - a notable number of patients that received hip or knee replacements have skipped their hospital stay and go back to their homes on the same day as their surgery. At the South California region, same-day joint replacement home discharges amount to approximately 50%, as reported by Dr. Nithin Reddy, the overseer of joint replacements for this region.

This is made possible with the introduction of new protocols for pain management with a smaller number of opioids use, new forms of anesthesia protocols that focus on regional anesthesia, smaller number of blood transfusions and a new type of nurses called “total joint coordinators” which provide assistance with the transition to home care, to name a few. Every patient that gets a home discharge is sent back to their residence with home health care, two outreach calls during the week after their surgery, in addition to comprehensive handbooks that contain checklists of what needs to be done before and post-surgery, as well as possible concerns that need to be monitored.

“We have very robust discharge criteria: Patients have to have well-managed pain and be able to get in and out of bed by themselves and in and out of the restroom by themselves. And they need to be able to walk 50 to 75 feet unassisted, using a walker,” Reddy said. “If they can’t do those things, they aren’t safe for a home discharge and [rehabilitation at] a skilled nursing facility would come into play.”

One such patient is Magdalena Ritayik, aged 66. She underwent a knee replacement surgery last September after her cortisone shots lost their effect and the pain started to become unbearable. Six years before that, her husband replaced both of his knees on two separate occasions, and stayed at the hospital each time for the duration of three days. What Magdalena did, however, was to go home the same day she had the surgery and much to her surprise, a nurse and a physical therapist were waiting for her there.

“The nurse went over all the medications, when to take them and how much. The physical therapist showed me how to do bending and stretching with a chair in the living room and to raise [my leg] while I was lying on the bed,” Ritayik said. “The first week you have to stay home. After the second week, I was walking almost like regular. A month after the surgery, I was at full extension and full bending.”